Where are the Rocky Mountains? 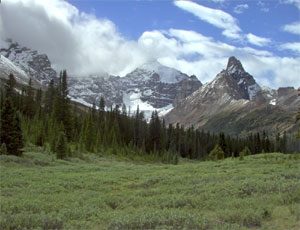 The Rocky Mountains stretch all the way from the southern United States north into Canada. They through Utah, Colorado, Wyoming, Montana, and up into Alberta. What we call the Rocky Mountains is really three different mountain chains, one on top of the other. The oldest mountain chain started more than a billion years ago, before there were any plants or animals living on land. The only living things on Earth at that time were one-celled creatures floating around in the oceans.

About 300 million years ago, a second mountain range formed in the same place, and then erosion wore it away. The third and youngest mountain chain pushed the older mountains up more again. That was about 60 million years ago, when the first monkeys were evolving on Earth, just after the dinosaurs died.

Most of the rocks of these younger mountains are igneous rocks like lava that shot out of volcanoes when the Earth was first forming. Or they’re metamorphic rocks like gneiss made out of that igneous rock. These rocks got pushed up into mountains because of plate tectonics. The Pacific plate with California, Oregon, and Washington on it was pushing against the plate that had the rest of North America on it. Because of how the plates were shaped, the Rocky Mountains formed not on the very edge of the plate, but several hundred miles further east.

Like the Himalayas, the Rocky Mountains are still growing even today as the Pacific plate continues to push against North America.

Bibliography and further reading about the Rocky Mountains: