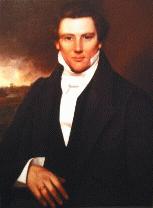 Joseph Smith, the founder of the Mormons

In 1820 AD,  Joseph Smith was fourteen years old. The teenager lived in a small town in New York State. He was upset when he realized that different Protestant ministers in his town had different ideas about God and how to worship God. The Presbyterians thought one thing. But the Methodists said something else. He went into the woods to pray alone for God to tell him which was the right answer. Joseph did have a vision. But in the vision, an angel told him that none of these ministers was right. The angel told Joseph he should start his own church.

Joseph waited until he grew up. Then in 1830, when he was 24 years old, he got together with 56 other men and women and he did start his own church. He called his church the Church of Jesus Christ of the Latter-Day Saints. He and his community published a book of their beliefs called the Book of Mormon. According to Joseph, he and his friend Oliver Cowdery got the power to baptize people directly from appearances of ancient Christian figures like John the Baptist, Peter, and Elijah.

Joseph Smith, and the people who joined his church, believed that God wanted their church to go back to the way Christianity was in the time of Jesus. They thought that over time the teachings of Jesus had gotten mixed up with Greek philosophy and other new ideas. So by now Christian churches were doing everything wrong. God wanted the Mormons (as other people called them) to go back and begin again.

Other Christians living nearby didn’t like being told that they were doing everything wrong. They tried to get rid of the Mormon people. Sometimes Protestant people put Mormon people in jail or killed them. The Mormon people moved from town to town, going further and further west, trying to find a place where they could live in peace. When they were in Illinois (ill-inn-OY), in 1844, the police arrested Joseph Smith and put him in jail. Then the angry people of the town broke into the jail and killed Smith. He was only 38 years old. (This sort of thing often happens to prophets of new religions: check out for example the life of Jesus, or Zoroaster, or Socrates, or Paul, or Confucius.)

Learn by doing: visit a Mormon temple or interview a Mormon
The Mormons settle in Utah