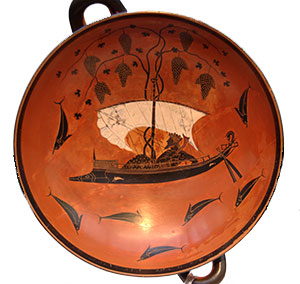 When your pot is dry, you fire it in a kiln. First you give it a lot of air, so the whole pot turns red, slip and all. This is because the oxygen in the air mixes with the iron in the clay to create oxidized iron, which is red like rust or blood.

Then you shut off the air supply, but just for a little while right at the end of the firing. When the air runs out, the fire sucks oxygen right out of the clay of the pot. But the places where there is slip, the slip is thinner and easier to suck air out of. So the slip turns black (the color of iron with no oxygen in it) faster than the rest of the pot (which is red, the color of iron with oxygen in it). 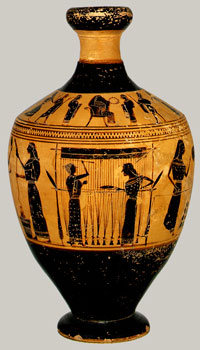 At first the Athenian potters didn’t know much about drawing people, and their people look a little funny. Later they got better at it. They began to care more about drawing the muscles and the eyes right. They were especially careful about arranging the picture so that the composition was balanced and interesting. They began to paint new subjects: not just Greek myths, but scenes from daily life and games.

For the first time, with black figure painting, we know the names of some of the vase painters, because they wrote their names on their vases. One famous Athenian potter of this time was Exekias; we call another one the Amasis painter, because we don’t know his name.

Black figure vase painting lasted until about 525 BC. Then Athenian artists began to use a different method called red figure painting.