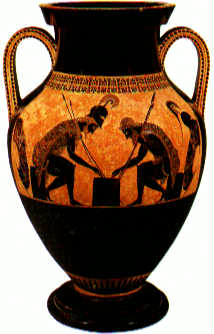 One of the most famous Greek black-figure vase painters was called Exekias (ex-EEK-ee-us). Exekias was from Athens. We know his name because he used to write it on his vases, “Exekias painted this vase.”

Unfortunately, we don’t know anything else about him; whether he was enslaved, whether he had kids, or anything. But even though he was a skilled artist, he probably was not a rich man. 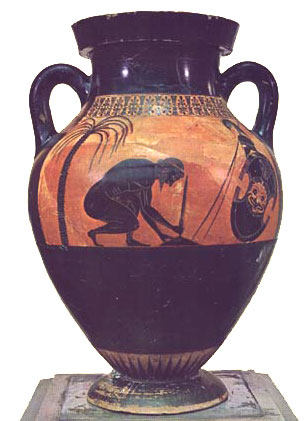 The suicide of Ajax, painted by Exekias

When did he live?

Based on the style of the vases he painted, Exekias lived about 540 BC.

Why is he important?

He seems to have been very interested in balance and composition – making sure that the people and things in his pictures were attractively arranged.

Exekias liked to show the climax of stories – the most exciting moment. On the left, Ajax is setting his sword in the ground.

It looks peaceful, but he’s about to throw himself on his sword and kill himself. 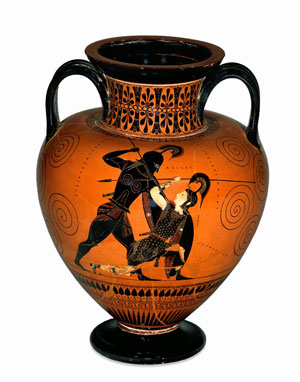 In this picture, Achilles is killing the Queen of the Amazons. But just as he kills her, they fall in love, and Achilles spends the rest of his life regretting the loss of his love.

Penthesileia
Who were the Amazons?

This theme – this dramatic tension – runs through most of Exekias’ work. It’s an illustration of the Greek tendency to see everything in the world as an “agon” – a fight – between two sides.