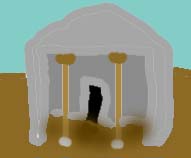 One important Early Bronze Age site is the town of Lerna. Lerna has a lot of small stone houses, and one house that is larger than the others. Archaeologists call this big house the House of the Tiles. That’s because instead of having a thatched roof this house had clay tiles on the roof. Like the houses from the last part of the Stone Age, this house is a megaron house.

Lerna also had a big stone wall around it. The wall did not go around all the people’s houses. It only protected the richest houses in the center of the town, at the top of the hill. But if there was a war, the poor people from outside could come inside the wall. They would be safe, even though the invaders might destroy their houses.

Other towns from this period also have one big house and a stone wall. One example is Tiryns, near Lerna, where archaeologists call the big house the Rundbau, or Round House (in German), because it is round.

Myrtos, in Crete (looking down from the top like a map) 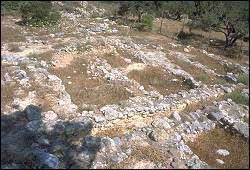 The site of Vasiliki in Crete – again, only the foundations of the walls are still there, but you can see the outlines of some of the rooms.

On the island of Crete, things were developing a little differently at this time. Instead of many separate houses, the Cretans tended to build houses all crammed up against each other, sharing party walls. Or some people see this as one big house, with a lot of doors. Either way it probably means that the Cretans lived more communally – sharing things – than the people of mainland Greece. And it seems like they were less worried about being attacked by their neighbors than the mainland Greeks were.

Learn by doing: make a Greek gold bowl
More about Bronze Age Greek architecture
More about the Early Bronze Age in Greece
What was happening in Egypt at this time?