Greek pottery: A vase from Neolithic Sesklo, in Greece (5000 BC)

Very few Greek painted pictures have survived the 2500 years since they were painted. So most of what we know about Greek art comes from the pictures they painted on fancy pottery.

Greek painting
Greek art history
Who were the Etruscans?
History of clay pottery
All our ancient Greece articles

Pottery, even if it gets broken, can be put back together, and a lot of it has even survived whole, mostly in Etruscan tombs in Italy.

That’s because for Greek people, pottery wasn’t just something to eat out of. From the Stone Age onward, Greek people made clay pots and bowls to sell to their neighbors. Sometimes they sold the pots empty, for wine jugs or table dishes.

People bought Greek dishes and jugs (and Greek perfume and wine) in Italy, in North Africa, in Northern Europe, in Central Asia, and in West Asia. 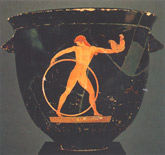 Greek pottery: A boy rolls a hoop on a vase by the Berlin Painter

Greek painted pottery changed a good deal over the five thousand years between the Stone Age and the Hellenistic period. For convenience, we divide it into seven different time periods. Click on each period to find out more.

Learn by doing: a vase-painting project
More about Greek art

A Greek Potter, by Giovanni Caselli (1986). A day in the life of a Greek potter, easy reading.

The History of Greek Vases, by John Boardman (2001). For adults, but clear and readable, by an expert who has written most of the main books on Greek pottery.

Looking at Greek Vases, by Tom Rasmussen, Nigel Spivey (1991) (each chapter is written by a different specialist, but the book as a whole is intended for non-specialists).