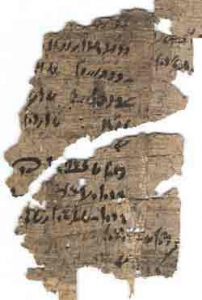 As in other parts of Africa, ancient Egyptian law said that every child in the family should inherit the same amount of land or money when their parents died – both brothers and sisters.

The Egyptians themselves had some problems with this rule. Some families didn’t like the idea that girls would take their part of the family farm with them into another family when they got married.

So sometimes in ancient Egypt girls married their brothers, to keep the land in the family. Or, a family with no sons might adopt their daughter’s husband (who would become her brother), so that he could inherit too.

Egyptian women sue for their rights

Egyptian women sometimes had trouble enforcing their rights. In one lawsuit, a married woman is suing her brother because he is refusing to give her her fair share of their fathers’ property. (Papyrus Brooklyn 35.1446, from the late Middle Kingdom, now in the Brooklyn Museum).

Bibliography and further reading about families in ancient Egypt:

Everyday Life in Ancient Egypt, by Lionel Casson (revised edition 2001). Not especially for kids, but pretty entertaining reading, and Casson knows what he’s talking about.

Or more about inheritance
More about ancient Egypt
Quatr.us home