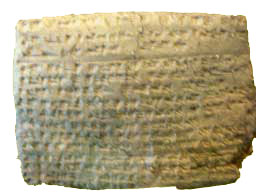 Inheritance: an Akkadian will (in the Louvre museum, Paris)

A will written in cuneiform

This is the will of a man named Baal-Karad from Syria, who lived about 1300 BC, in the time of the New Kingdom in Egypt and the Trojan War in Greece. The scribe wrote Baal-Karad’s will in cuneiform letters on a clay tablet.

Who were the Assyrians?
What is cuneiform?
Inheritance in ancient Egypt
History of inheritance
Bronze Age timeline
All our West Asia articles

What does the will say?

Baal-Karad said that when he died all his stuff should be divided equally among his five sons – nothing went to his wife or to his daughters, although he did say that his wife could use the property until she died.

The Code of Hammurabi (1700s BC) has laws about inheritance.

This was pretty usual all over West Asia. Women did not inherit property; only men did. If women wanted to have land, or somewhere to live, they had to be married to a man, or live with their father or brother.

How was inheritance divided?

Notice also that Baal-Karad’s sons each got the same share. In medieval England, only the oldest son inherited the property.

The Code of Hammurabi, written about 1700 BC in Babylon (modern Iraq), also says that all the sons should get equal shares of the inheritance. But before he died, the father could choose to give extra presents to a favorite son.

In section 165, for instance, the Code says: “If a man gives a field, garden, and house to one of his sons whom he prefers, and a deed for them, then when the father dies and the brothers divide the estate, they shall first give this brother his father’s present, and he shall accept it, and then they shall divide up the rest of their father’s property.”

A Sumerian math problem about inheritance