What is usury? Economic history

The first idea to charge interest seems to come from Bronze Age West Asia, and people lending each other cows. If you let somebody else take care of your cows for a year, in the spring when he returns them there will be a lot of new baby calves, that were born during that year. Who gets to keep those new calves, you or him? The fair thing seems to be that you get some of the new calves, and he keeps some. The new calves you take are your interest, and in fact the word for interest in both Sumerian and Greek is the same as the word for “calf”.

We know that people have been making loans at interest at least since about 1800 BC, because the Babylonian code of Hammurabi forbids charging too much interest. Probably around 600 BC, the Jewish books of Exodus and Deuteronomy spoke out against charging excessive interest to the poor.

In India, about 500 BC, both Hindus and Buddhists looked down on usury. Vashishtha, a Hindu lawmaker, made a law that nobody in the Brahman or Kshatriya castes could lend money at interest. And Buddhist writings from this time say that nobody can hope to escape the Wheel of Life if he or she lends money at interest. But it’s hard to keep people from lending and borrowing money, which you really need in order to start businesses or do trades. By the 200s AD, Indian experts had begun to say that usury was only wrong if the rates were very high.

During the Roman Empire, and in Han China, most people didn’t worry too much about usury except to try to control the rates. Jesus spoke out against usury, but bankers weren’t listening to him. But after the fall of Rome people did less trading and Christians became more powerful. Usury became unpopular all over West Asia and Europe. In the Islamic empire, usury was forbidden. The Quran said:

Believers, do not live on usury, doubling your wealth many times over. [The ‘Imrans 3:130]

Those that live in usury shall rise up before God like men whom Satan has demented by his touch; for they claim that trading is no different from usury.”[The Cow 2:275] 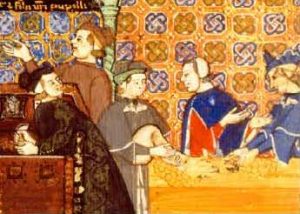 Bankers in Genoa, Italy (De Septem Vitis, from the 1300s)

So most Muslims would not lend money at interest. But people still needed to borrow money, so by the 1300s the Islamic Empire had developed a system where banks became partners in enterprises rather than just lending them money.

In the Middle Ages in Europe, in the time of Charlemagne, the Church also said that usury was a sin, and you couldn’t go to Heaven if you lent money out at interest. So Christians mostly didn’t lend money, and instead when people wanted to borrow money they went (ironically enough) to the Jews.

Learn by doing: calculating percentages
What happened when people fell into debt
More about medieval Jewish people
Or about the Code of Hammurabi
More about money

Bibliography and further reading about usury:

Eyewitness: Money, by Joe Cribb (2000). Not the best in the series,but still a good introduction to exchange systems for kids.

An Annotated Bibliography on the History of Usury and Interest from the Earliest Times Through the Eighteenth Century, by John Houkes (2004). Lists other books about usury, and explains what they’re about.

Teachings on Usury in Judaism, Christianity and Islam, by Susan Buckley (2000)