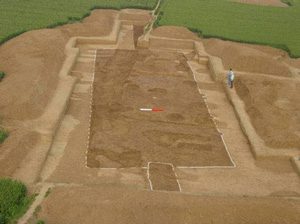 Remains of the Shang Dynasty palace at Erlitou

The beginning of Chinese architecture

Even as early as the Shang Dynasty, about 1500 BC, the buildings we know about look like later Chinese buildings – anyone would know they were from China, not from West Asia or Africa.

More about the Shang Dynasty
All our China articles

In the cities, people lived in rows of rectangular houses laid out in rows, built of wood and rammed earth. Rammed earth is just dirt that’s been packed down hard by pounding on it, like packing the sand into the bucket to make a sand castle.

In the center of the city, there was a big palace or temple (nobody is sure which) on a high earth platform like the earlier Sumerian ziggurats. One building at An-yang was a big hall with pillars all the way around it, about the size of a modern basketball court (though the Shang Dynasty emperors didn’t use the building for basketball!).

What is a ziggurat?

Reconstruction of the Shang palace or temple at Panlongcheng

An early Chinese temple or palace

There was another building a lot like this one at Panlongcheng. Both buildings probably had thatched roofs.

What is a thatched roof?

About this same time – about 1500 BC – Egyptian architects in Africa were experimenting with their first stone temples.  These temples also had columns, but the columns had to be very close together to hold up the heavy stone roof.

Later Greek temples from around 800 BC also have wooden columns all the way around them and thatched, slanted roofs. But the Greek temples were built hundreds of years later than these Chinese ones.