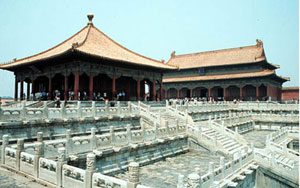 Early Ming Emperors built Taoist temples to show their power, like the Golden Hall in the Wudang Mountains. But the great achievement of the Ming Dynasty architects was that they built the great palace called the Forbidden City.

Ming Dynasty
What is Taoism?
The Golden Hall
Chinese government
All our ancient China articles

This was the palace of the Ming Dynasty emperors, in Beijing, and it was the center of the government of China. It was called the Forbidden City because nobody could go in or out without the emperor’s permission. 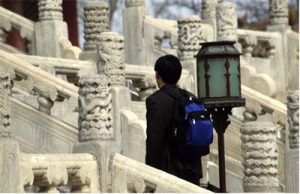 A staircase in the Forbidden City

Around the Forbidden City

There’s a moat around the whole Forbidden City, and a wall nearly eight meters high. Like all Chinese city walls beginning in the Shang Dynasty, this wall is of rammed earth, but it also has three layers of mortared baked bricks on each side.

More about bricks
And about mortar

Inside the Forbidden City

Inside the wall, there are 980 buildings, with more than eight thousand rooms. Most of the buildings are made of wood, with brick floors. The tile roofs are painted yellow, the color of the emperors. 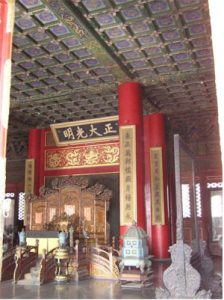 A throne in the Inner Court

Once you get inside the walls through the Meridian Gate, you’re in the Outer Court of the Forbidden City. The Outer Court was for big ceremonies. It has a river running across it (the Golden Water River).

This was where the Ming Emperors held court – where they sat on their thrones and judged cases, met ambassadors, and did other important things.

From the Outer Court, you can go on into the Inner Court, where the Emperor lived and did ordinary government business.
There are another three halls in the center of the Inner Court. The Emperor lived in the Palace of Heavenly Purity. Next to this hall is another one for the Empress, and behind them is a garden and smaller buildings for the Emperor’s other women and children. There were also two Taoist shrines.