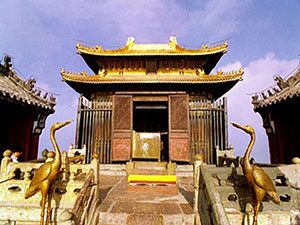 Who built the Golden Hall?

Why did Zhu Di build it?

Zhu Di, the Yongle emperor, who built the temple, wanted to show how powerful he was, so he made sure the Golden Hall would be really spectacular to look at. He built the Golden Hall on the very highest spot on Wudang Mountain.

Like other Chinese monuments, the Golden Hall is mainly twelve stone columns holding up a roof. The columns stand on a granite platform, with a carved stone ramp leading up to the door. But what’s exciting is that the entire walls and roof are made of cast bronze coated with gold gilding, making it shine yellow like gold. All the parts of the hall that would normally have been made of wood were cast in bronze instead.

What is bronze?
A project with bronze

Inside, there’s a life-size gilded bronze statue of Xuan Wu, a Taoist god. Zhu Di said that Xuan Wu had helped him overthrow his nephew to become emperor, and so he honored Xuan Wu with this temple – and reminded people of his own power.

Lightning and the Golden Hall

Because the Golden Hall was at the very top of the mountain, and made of metal, it attracted lightning strikes every time there was a thunderstorm, as if the gods were really there.