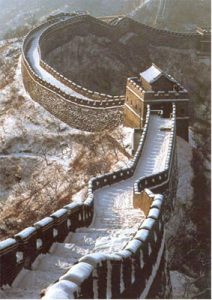 The emperors of the very short Qin Dynasty, about 200 BC, united China under their rule. To show how powerful they were, the Qin emperors ordered many roads and irrigation canals all over their empire.

To keep China safe from invasions from Central Asia, the Qin emperors also built the Great Wall of China. Probably local kings had already built many small pieces of the wall in places that needed extra defences, so the Qin emperor could show that he had united the empire by building more walls to tie all these short walls together.

The Qin emperors also built (or began to build) a big palace for themselves, the Epang Palace, and a big tomb, the Lishan Mausoleum. The Epang Palace is supposed to have been very big, and laid out a lot like the later Forbidden City of the Ming Dynasty. But there are hardly any traces of it left anymore, if it was ever built at all. The Lishan Mausoleum is like the pyramids of Egypt, a big hollow hill. Inside the hill, the emperor had hundreds of clay statues buried, to be his soldiers and his slaves in the afterlife.