What is a misericorde? Middle Ages 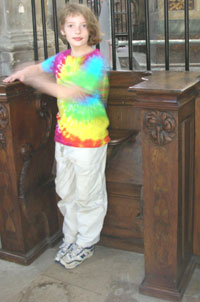 A misericorde in a church

Why did people need misericordes?

In the Middle Ages, Christian priests and monks sang in their church choirs just as people do today. Sometimes they had to sing for hours, standing up. Their legs would get very tired. But they weren’t supposed to sit down.

What is a Christian priest?
What’s a monk?
History of music
Medieval religions in Europe
All our medieval Europe articles 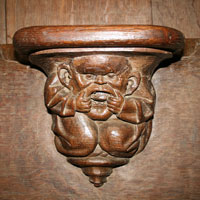 So the monks built folding wooden seats into their church choirs, where the choir stood. (It’s called the choir because that’s where the choir stands.) These seats had to be folded up when the choir was supposed to be standing up. But the seats had little shelves built onto them so that you could lean on them and still look like you were standing up. People called these seats with the shelves “misericordes,” (MEE-ser-i-CORDS) because that means “pity” in French, and these were seats that took pity on your tired legs.

What is a church choir?
More about medieval churches
Medieval European architecture

While they were at it, the people carving these wooden seats often carved funny sculptures into the underside of the seats. You could only see the carvings when the seats were folded up, so they were a good place to put little jokes. Sometimes the carvings show cute bunnies or foxes. Other times they show people being bad, or just being funny. One misericorde shows people going to the bathroom!