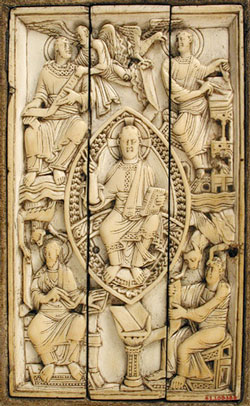 At first, German art after the fall of Rome was a lot like Visigothic or Merovingian art. People call German art made after the 900s AD “Ottonian” after the German emperors who were ruling at that time. Because these Otto emperors thought of themselves as being Holy Roman Emperors, putting the old Roman Empire back together, they liked art that looked Roman, or that at least reminded them of ancient Rome (while still being clearly Christian). German artists at this time were much more skilled than artists in France or England, or even Constantinople. 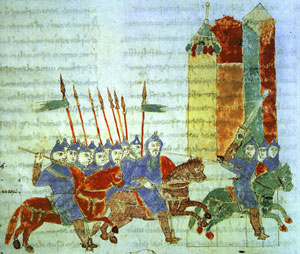 German Knights with Couched Lances, from an encyclopedia of warfare, 1028 AD

After the Ottonian period in art, between about 1000 AD and 1200 AD, came the Romanesque, where people built many big stone churches and castles in Germany. These were big, heavy buildings that showed how powerful the Holy Roman Emperors were. The cathedral at Mainz is a good example. The style was not very different from how people were building at the same time in France and Italy, showing how architects often travelled from one place to another, all across Europe. 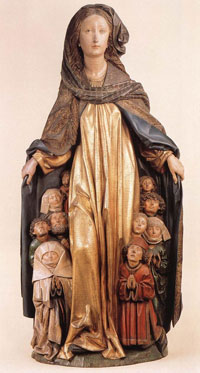 We call the last period of German medieval art Gothic (though actually it has nothing to do with the Goths, who weren’t even living in Germany). Gothic art is also pretty much the same in Germany as in France and Italy – it began in France, but soon spread to both Germany and Italy. Germany really ruled most of Italy at this time anyway. In Germany, where there was plenty of wood, sculptors carved many statues of painted wood. The figures have heavy, rich robes and cloaks.

Learn by doing: build a castle
More about Russian art