Native Americans made most of the art from North America in the 1500s and 1600s AD. They made a lot of art. Artists used many different styles depending on where you were. In the Pacific Northwest, wealthy families had huge totem poles carved to show how important they were. In the Southwest, people used pottery decoration to show what family they were from. And in the West, people carved or painted complicated designs on the bare rock to record their history. (Compare this to the Khoisan rock paintings from Africa about the same time.) Many artists recorded the new things they learned from the invading Spanish people – like horses, and wheels. 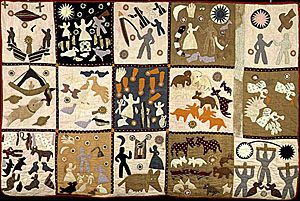 By the 1700s, European settlers started to make their own art in the style of the places they had come from. They painted oil portraits and made stone statues of their leaders. Native American artists learned new ideas and techniques from the Europeans. They made these new techniques their own. In the Southwest, Navajo people learned to keep sheep and to weave their wool. They wove Native patterns and colors into their blankets. Other Native Americans experimented with painting in oil. Sometimes they painted in European art styles and sometimes in their own tradition. Many African art ideas also came to North America about this time on the slave ships. Some quilt patterns may have come with Africans, for example, and batik, and musical instruments like the banjo. But many African art traditions were also lost, because people didn’t have much time for art while they were working as slaves. 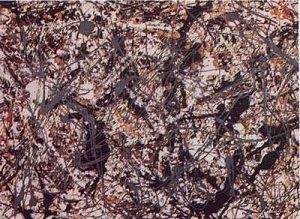 In the 1800s, many Native American art traditions were also lost. The United States and Canadian governments took Native American children away from their parents and their villages. These governments forced Native children to grow up surrounded by only European culture. At the same time, many people were able to travel on steamships from Europe to America and back again. So American art became more and more like European art.