Who invented board games? 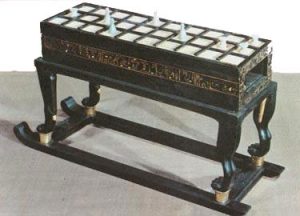 People were playing board games earlier than we have any records. Probably the first board games were scratched into dirt. People played with stones or fruit pits for pieces.

History of games
Games in ancient Africa
All our Africa articles

The earliest board game that we know about for sure, from Pre-dynastic Egypt, about 3000 BC. It’s a game called Senet. Senet was like our modern game backgammon. People also played backgammon in ancient Iran by about 3000 BC, using dice that were pretty much just like modern dice.

Liubo in China, Mancala in Africa

By 1500 BC, people in Shang Dynasty China were playing a game called Liubo. We don’t really know the rules to Liubo. A little later, about 1400 BC, Second Intermediate Period people in Egypt seem to have been playing an early version of the African game Mancala. 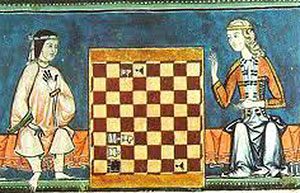 A Muslim woman and a Christian woman play chess in Spain

About 400 BC people in China began to play a form of chess, and gradually people in India and Central Asia learned to play chess.

Greater interest in board games led to the Indian invention of Parcheesi around 300 AD, and a version of Chutes and Ladders about 1200 AD.

Chess spreads to Africa, Europe, and the Americas

Learn by doing: play a game of chess or backgammon
More about dice games

Bibliography and further reading about the history of board games: