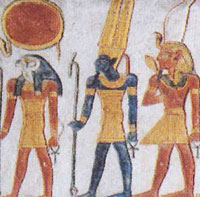 The Egyptian god Amun is the blue figure in the center.(From the tomb of Rameses VI at Luxor)

Why does Amun have blue skin?

Amun (or Amon), in Egyptian religion, was the god of air and wind. He was sometimes invisible, like air. Other times artists showed Amun with blue skin, or as a blue frog – blue like the sky. (Compare Amun with the Indian god Vishnu, who also is sometimes blue.)

Why does the wind blow?
Why is the sky blue?
The Indian god Vishnu
All our Ancient Egypt articles

Because Amun was the god of air, people also began to think of him as the god of the “ba”, or the soul, which is like the breath of life.

This made Amun seem more important. By the end of the First Intermediate Period, people thought of Amun as a god who created the world (because he gives life) and he got married to the goddess Mut.

Amun and the Aten

In the New Kingdom, the capital of the pharaohs was at Thebes, in Lower Egypt, and that was the main city where people worshipped Amun.

The New Kingdom
The Amarna Period

Amun was an African god

Greek travellers like Herodotus thought of Amun as being like Zeus, and Amun’s wife Mut as being like Zeus’ wife Hera. But really Amun was an African god, who was also worshipped south of Egypt in Meroe, and in other parts of Africa by the Bantu.

The Greek god Zeus
African religion
All our Africa articles

How Amun was forgotten

After the Egyptian pharaohs stopped having their capital at Thebes, at the end of the New Kingdom about 1200 BC, fewer and fewer Egyptians worshipped Amun. People in Kush, further south, however, continued to worship Amun until about 200 BC.

Did you find out what you wanted to know about the Egyptian god Amun? Do you have more questions? Let us know in the comments.

Bibliography and further reading about the Egyptian god Amun: