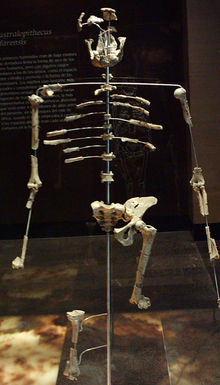 Early humans: Skeleton of early human Lucy, from about 3.2 million years ago

When did the first humans evolve?

About six million years ago, the earliest people evolved from earlier primates in East Africa.

Why did people evolve from earlier primates?

People may have evolved in order to take advantage of new wetlands that were taking over from the jungle in Africa beginning about eight million years ago as the Earth cooled down.

Very soon, these people began to walk on two feet, and their arms became weaker and shorter, as they spent less time swinging from tree branches. That might have been so they could swim and wade across lakes, and gather shellfish along the shores, and spear fish.

Read more about the history of fishing

More and more, these people slept on the ground, in groups, instead of in the trees, and they slept more deeply, for fewer hours. They dreamed more.

These first people were still pretty hairy, like monkeys, and had small brains. Possibly they continued to have babies with other primates like chimpanzees sometimes for another million years. They probably ate mostly fruit, like chimpanzees, but also roots like yams, nuts, insects, meat, and a lot of fish and shellfish.

People didn’t evolve in a straight line from earlier primates. They evolved in lots of different ways, trying out different adaptations. A group we call the Neanderthals evolved to have red hair. Another group, the Denisovans, evolved to be able to breathe at the top of high mountains. Homo Florensianus evolved to be short, while Homo Erectus evolved to be tall, with long arms and legs. Traces of all of these groups show up in the DNA of modern humans.

More about different types of early humans
More about DNA

When did early humans lose their body hair?

By about two million years ago, modern humans were beginning to evolve. They lost their body hair and developed black skin to protect them from the sun. They began to have bigger brains. Their tongues and throats evolved so that they could talk. About one million years ago, people figured out how to make fires to cook their food and keep warm.

Read more about the history of fire

About 60,000 BC, when the first humans began to live further north, in Europe and Asia, to keep warm they had to re-evolve some of the body hair they had lost in Africa. People started to have long, straight hair, and men grew big beards to protect their skin from cold.

When did people evolve to have pink skin?

When humans started to farm, about 10,000 BC, they ate less fish and didn’t get enough Vitamin D. Many of them evolved pink skin, to be able to absorb more Vitamin D from sunlight.

Then when humans first began to keep cattle and sheep, about 6000 BC, some of them evolved the ability to digest milk. That’s why some people can digest milk and others can’t. People are still evolving today, though it happens so slowly that it’s hard for us to see.

Learn by doing: start a campfire from coals or with a match
More about the Quaternary period