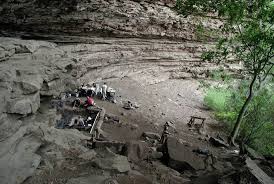 In the early years of human history, beginning with the earliest humans about two million years ago, every place in the world was in the Stone Age, and all the people in the world got their food by hunting and gathering.

For a long time, there were probably only about 2000 people in the whole world. All of these people had black skin, to protect them from the sun. All of them lived in Africa, and they lived in trees or caves or temporary shelters. Even before they were modern people, about 3 million years ago, they began to make stone tools. Around 800,000 BC, people learned to use fire. 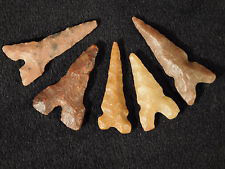 About 65,000 years ago, probably drawn by the changing climate at the end of an Ice Age, a few of these people left Africa. They were probably people who got most of their food from fishing. They probably traveled, either walking or in small boats, along the coast of the Arabian peninsula, down around the coast of India, and eventually in boats to Australia. These people also had black skin.

Later on, about 50,000 years ago, different people moved out of Africa into West Asia. It was about this time that people first started to wear clothes. From West Asia, around 45,000 BC, people moved west into Europe and east towards Central Asia, China, and Japan, where they met and mixed with the descendants of the first group of people. It may have been in East Asia about 40,000 BC that wolves became the first dogs, the first tame animals. 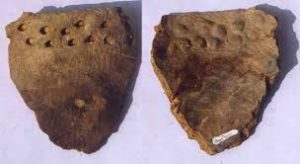 Earliest pottery from China, about 20,000 BC

About 22,000 BC-16,000 BC there was an Ice Age. Many people had to move when it got too cold where they were living. People in northern Europe moved south into Spain and Italy. People in Central Asia moved into India. Other people used boats or rafts to reach North America and South America around 20,000 BC.

A lot of the world’s water turned into icy glaciers, and so the oceans were shallower than they are now. Some places that are now underwater were above water. One of those places was the Bering Strait between Russia and Alaska, and so more people were able to cross over from Asia to North America using this bridge, taking their dogs with them. 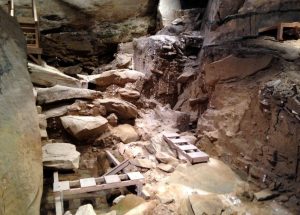 Meadowcroft rock shelter in what’s now Pennsylvania. People lived there by around 14,000 BC.

Around 14,000 BC, with the Ice Age ending, people moved back north again into northern Europe and Central Asia. People in China and Japan began to make the first pottery, probably for cooking and fermenting fish in order to store it.

Another dry period, which we call the “Younger Dryas”, started about 11,000 BC. Again, people moved from Central Asia into India. People began to make the switch from fishing and hunting and gathering to farming, at least part-time, as a way of getting their food. Some people started farming before they settled down in one place, while other people settled down in villages before they started to farm. In North Africa and West Asia, people were planting fig trees.