Jews in the Islamic Empire

Jews in the Islamic Empire: The synagogue where Maimonides worked in Cairo, Egypt (1100s AD)

The Arabs first began to attack the Roman Empire in the 630s AD. At first, the Jews were quite enthusiastic about the idea of getting rid of their Christian persecutors. We don’t really know whether the Jews actually helped the Arabs to conquer Israel and Syria. But many Roman Christians suspected that the Jews had helped the Arabs. 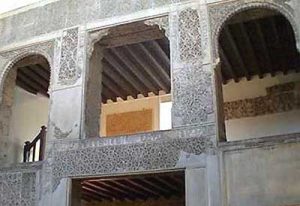 The synagogue in Cordoba, Spain, built under Arab rule in 1315 AD.It is decorated in the Arab style. Maimonides studied in an earlier synagogue on the same spot, when he was a child.

How did the Arabs feel about Jews?

The Arabs, unlike the Romans, were fairly welcoming to the Jews. Many Jews moved from the Christian countries to the Islamic Empire at this time.

So were the Jews fine after that?

No, I don’t mean that the Jews in the Islamic Empire never had any more trouble. The Arabs wanted the Jews to convert to Islam. So the Jews had to pay special taxes if they would not convert. But they were not killed, or made to live in special parts of town, or forced to convert, or at least not usually. Some Jews did convert in order to work at the Abbasid court.

Others did not, like the most famous Jewish person who lived at this time, Maimonides. Maimonides was a philosopher who tried to make the scientific work of Aristotle agree with the religious work of the Bible. He was also the chief doctor for Saladin, the Ayyubid ruler of Egypt.

Later on, in 1492, when Queen Isabella and King Ferdinand decided to throw all of the Jews out of Spain, many thousands of Spanish Jews travelled to the Ottoman Empire, or to North Africa. In these Islamic countries, the Jews were welcomed and lived in peace.

More about the Jews
Quatr.us home