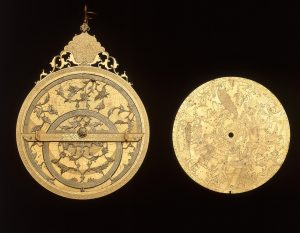 Iranian science: A Safavid astrolabe from the 1600s AD

Iranian scientists in the Safavid Empire, and then in the country of Iran, were well placed to hear all about new ideas from both East and West. They learned  from China and India. Then they combined that with the news from the Ottoman Empire, Russia, East Africa and Europe. This way, they could develop new theories and inventions.

In the 1740s, Nader Shah‘s personal doctor, Louis Bazin, was a Jesuit from France. (But European medicine in the 1700s wasn’t so great. This wasn’t really a good idea.) Safavid mathematicians and astronomers spent a lot of time copying over older Arabic books about math and astronomy.

They were very interested in the new European telescopes, microscopes, and new discoveries, too. But they didn’t really work on new ideas themselves. As in the Ottoman Empire at the same time, Iranian people just didn’t have enough money for enough kids to go to school, and learn to be scientists. Most kids just had to stay home and work as farmhands.

In 1815 Shah Abbas Mirza tried to modernize Iran. He sent five Iranian students through Russia to Europe to get a European education. These students, like other Iranians who visited Europe, thought they knew why there was so little science done in Iran. They thought that the shahs discouraged people from thinking for themselves. But probably it was more that Iranian people still weren’t rich enough to send their kids to school.

The British in Iran

In the 1800s, British colonization in Iran led British governors to build colleges and universities in Iran to educate people. In 1878, the American Joseph Cochran built a medical college and a hospital in Urmia, for example. His hospital saved many babies from dying of disease. By the 1910s, newspaper writers like Taquzadeh were urging Iran to learn from Europe and become modern. Slowly, Iran began to use tractors and better seeds for farming. People got to be better off. Kids started to go to school, and some of them started to grow up to be scientists.

On the other hand, British colonialism in Iran meant that most of Iran’s money went to Britain. Iran didn’t get rich enough to send all its children to school. So Iran still ended up mostly using British inventions – and paying for them – instead of making their own discoveries.