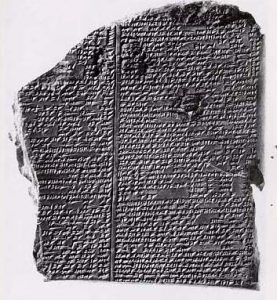 Who was Enlil? This is what one of the tablets that was found in the Assyrian king’s library looks like. This one tells the story of the Flood.

According to Sumerian stories dating back to about 3500 BC, he was a god of air and wind, weather and storms. He also was a god of growing plants, like the Greek goddess Demeter.

The Enuma Elish
Who were the Sumerians?
West Asian religion
All our West Asia articles

When Enlil was young, he had a baby with the goddess Ninlil, and the other gods threw him out of heaven and he had to go live in the underworld. But Ninlil chose to go with him. And after a while he and Ninlil went back to heaven together.

The ruler of the gods

After this Enlil ruled the other gods, and was the father of many gods. The Sumerians said that he created people. But after a while of having people around, he got tired of listening to the people’s noise (compare the story of the Enuma Elish, or the Tower of Babel).

The Tower of Babel
Noah’s Ark
The Epic of Gilgamesh

So, as told in the Epic of Gilgamesh, Enlil sent a big flood to kill all the people (compare the story of Noah). The god Ea helped one man, Utnapishtim, survive the flood, and Utnapishtim repopulated the earth and then became a god himself.

But by around 1700 BC, the Babylonians were ruling Mesopotamia, and they had their own ideas about the origins of the gods. The Babylonians said that their god Marduk was the king of the gods, and that Marduk had defeated Enlil.

Who was Marduk?
The Babylonians