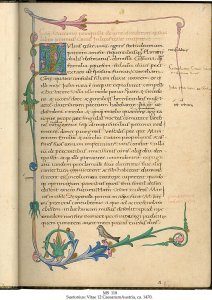 A manuscript of Suetonius’ Lives of the Caesars, copied out in Austria in the 1470s

Suetonius lived just a little later than Seneca, during the reign of the Flavian emperors and then into the reigns of Trajan and Hadrian. He lived at the same time as the younger Pliny, and was a friend of his. Suetonius was not himself much involved with politics, and did not come from one of the leading families of the Empire. He worked at court, though. He was apparently in charge of keeping records for the emperors of what they had done and what the emperors who came before them had done.

Because of his position, Suetonius was able to know more history than most people, and he decided to share that knowledge by writing biographies of all the Roman Emperors up to his own time, from Julius Caesar to Domitian. Not all of Suetonius’ biographies survived, but most of them did. They are, along with the histories of Tacitus, our most important sources of information about the early Roman emperors.

Learn by doing: write a biography of a famous person in Suetonius’ style
More about Tacitus
More about Julius Caesar
And more about Augustus

Bibliography and further reading about Suetonius: