What is a chi-rho symbol? Early Christianity 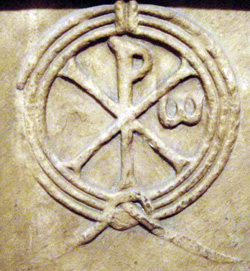 A chi-rho symbol from the Cluny Museum in Paris. This one is missing the alpha.

What is a chi-rho symbol?

The Chi-Rho symbol is an anagram – a combination – of the first two letters of Christ in Greek, the Chi (our CH) and the Rho (our R). The Chi looks like an X and the Rho looks like a P. In the time of the Roman Empire and in medieval Europe, these two Greek letters written together stood for Christianity, the way the New York Mets’ logo has the N and the Y on top of each other. So the Chi-Rho is like a logo for Christianity. 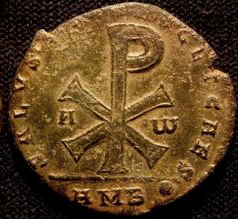 Coin of the Roman Emperor Magnentius (300s AD). The coin has a chi-rho symbol on it, with the alpha and omega on either side.

When did the chi-rho first appear?

The first time Christians used the chi-rho symbol might have been when the Roman Emperor Constantine was fighting the battle of the Milvian Bridge in 312 AD. But more likely the first time anyone used it was a little later, sometime in the 300s AD.

Why is there an alpha and an omega too?

In case you were wondering, the reason some chi-rho’s have a Greek letter alpha (A) on one side of the chi-rho and a Greek letter omega (looks like a W) on the other side is that the Bible says that Jesus said “I am the alpha and the omega, the beginning and the end” (because  alpha was the first letter of the Greek alphabet, like our A, and omega was the last letter of the Greek alphabet, the way Z is our last letter in English).

Learn by doing: make an anagram of your own name
More about the alphabet
More about Jesus

What is Communion?
What is Lent?
History of the Alphabet
More about Christianity
Quatr.us home