What is inertia? Physics – Science 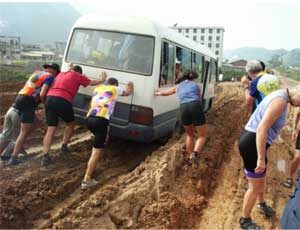 The bus is heavy, so it’s hard to get it moving.

Who first wrote about inertia?

A law of physics first suggested by the Uzbek scientist Ibn Sina about 1000 AD states that “an object at rest tends to remain at rest, and an object in motion tends to remain in motion.” Scientists call these tendencies inertia.

Who was Ibn Sina?
What’s the First Law of Motion?
Medieval Islamic science
All our physics articles

A definition of inertia

Inertia is a way of measuring how hard it is to change the momentum of an object, whether that’s getting it to speed up or getting it to slow down. That depends on how much mass the object has. Big heavy things (things with a lot of mass) have more inertia than light things. You have to push a bus harder than a scooter to get it to move.

What is momentum?
What is mass?
And what is acceleration?

Ibn Sina saw that the reason real objects on Earth seem to slow down on their own is that friction with the air or the ground stops them.

What is friction?
A project with friction
Who was Galileo?
Who was Isaac Newton?

Later on, Galileo did experiments to show that if you rolled a ball down a ramp it would go almost as far up the ramp on the other side, and the smoother the ramp, the farther the ball would go. Then Isaac Newton worked out the mathematics to prove how inertia worked.

Bibliography and further reading about physics: