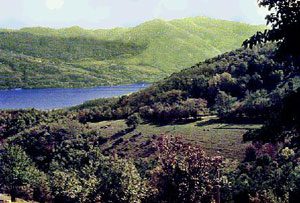 The first modern humans, the Cro-Magnons, probably walked into Northern Europe from Central Asia around 45,000 years ago. Some followed the fish along the Mediterranean coastline to Greece, then Italy, then southern France and Spain. Others followed fish northward along the Danube and Volga rivers into northern Europe and the Baltic. When these hunter-gatherers arrived, they found another type of human, the Neanderthals, already living in Europe. 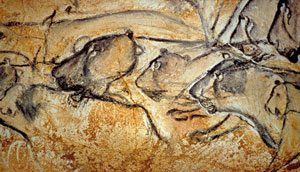 Around 4500 BC, many West Asian farmers moved into Europe, bringing farming with them, as well as domesticated cattle and sheep and pigs. These West Asian people also had evolved to digest wheat better, and they brought that gene with them to Europe. They also brought lighter skin to compensate for eating less Vitamin D. New polished stone axes allowed people to cut down trees and clear land for their farms. As people started to farm, they also began to make pottery. It took a long time for farming and cattle-raising and pottery to reach all the way north to Britain and Scandinavia – about 3000 years – so a lot of people were still hunting and gathering too. As people started to farm, they could support more people, and there started to be a lot more people living in Europe, but still not nearly as many as in West Asia or North Africa.

Learn by doing: Find Europe on a globe. How do you get there from Central Asia? From Africa?
More about the Bronze Age in Northern Europe