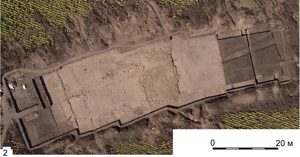 When modern humans first arrived in Europe from Central Asia about 45,000 BC, they weren’t building houses yet, and they lived in caves. When they did start to build houses, maybe around 10,000 BC, they built their houses and temples out of wood, like their cousins in ancient China. Northern Europe was covered with thick forests of big oak and walnut and maple trees. It was easy to get wood. 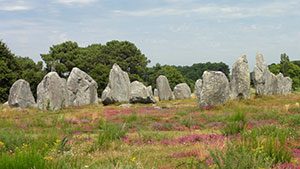 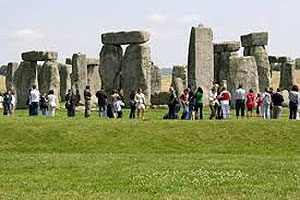 But wooden houses don’t last very well, so the earliest buildings that lasted were important people’s graves built out of big stones. People built these graves between about 4500 and 2000 BC. This is about the same time as the Pyramids in Egypt and the ziggurats in West Asia. 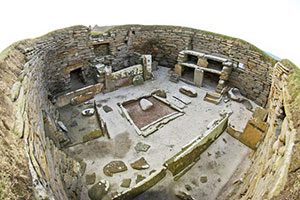 The people of northern Europe, like the Greeks to their south, often lived in villages on hilltops, surrounded by deep ditches and wooden fences to keep out their enemies. Often there is more than one set of ditches and walls. Their small round houses had wood frames filled in with wattle and daub, sometimes sunk partly into the ground. Further north in Scotland, where there wasn’t much wood, they built houses out of stone. Like this house, most Northern European houses had just one room with a firepit in the middle and shelves and cabinets built against the walls.

Learn by doing: what do people build houses out of near you? Are most houses wood or stone or brick? Walk around and see.
Bronze Age architecture