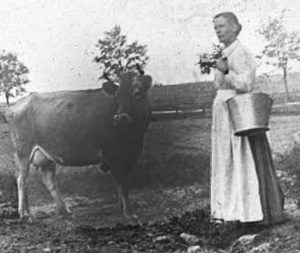 Indentured servant Nanny Hull, working on Quaintance farm in Kentucky in the 1800s

Because most of the people who lived in North America had died during the 1500s AD of smallpox and measles and other diseases brought by European traders, by the 1700s there were not very many people left on the East Coast to work on farms there. So English settlers began to invite poor people from England to come over to North America to work for them as indentured servants.

If you were poor, rich people on the East Coast would pay for your boat ride to America, and then when you got to America you had to work for them as a slave for about seven to ten years to pay off the cost of your boat ride. Then you would be free and you could start a new life in North America.

Many poor people thought this was a good idea. For some of them, it did work out well. But many indentured servants found that their new masters forced them to work very hard and didn’t feed them enough. A lot of indentured servants died before they got free.

Not enough poor people volunteered to come be indentured servants in America, so in 1718 the British government arranged to start forcing people to come. Mainly they forced people who had been convicted of minor crimes like stealing food to go to America as indentured servants. Owners treated these convicts even worse than regular indentured servants. A lot of them died. After the American Revolutionary War in 1776, no more convicts came from England (England sent convicts to Australia instead), but a lot of indentured servants still came from Ireland. Men and women usually worked for three to five years, and children for six or seven years. This continued even after the Civil War, even after slavery was illegal in North America. Even today, many people still come to the United States and Canada illegally from China or Mexico as indentured servants.

Learn by doing: what can you do to stop illegal indentured servitude?
More about slavery

Bibliography and further reading about indentured servants in North America: