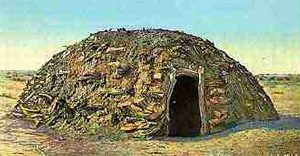 A Navajo hogan. Hogans had their doorways facing east

Early on, when Navajo people lived in the northern part of North America (modern Canada), they lived in small houses they called hogans. You built a hogan by propping a few poles together and covering the surface with branches, leaves, and mud.

But when the Navajo moved south and settled in the south-west part of North America about 1400 AD, they gradually settled down and began living in permanent houses so they could farm. They called these houses “hogans” too. 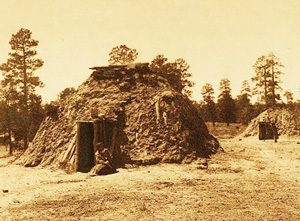 You build a permanent hogan by laying wooden poles or logs on the ground, and then laying more poles on top of those poles, going around and around. When the walls are high enough you narrow them in to make a domed ceiling.

What is plaster?
What is half-timbering?

Then you plaster over the wood with mud to fill in all the spaces between the poles. This is something like the half-timbering medieval Europeans used at the same time, or like a round log cabin.

Navajo people always built hogans with the door on the east side, so the morning sun would come into their house. Hogans had dirt floors and only one room. If people needed more room, they built more hogans near their first one, so that a Navajo home often had a bunch of hogans, one for each wife if there were several wives in the family, and maybe a sweathouse also (to get clean in, like our bathrooms), and separate buildings for storing things in (like our basements or attics).

Inside the hogan, women sat on the right, or the north side, where they kept their cooking things, and men sat on the left, or the south side. People slept on mats on the floor, with their feet toward the fire in the middle of the hogan.

Did you find out what you wanted to know about the Navajo hogan? Let us know in the comments!

Learn by doing: where do women sit in your house? Where do men sit?
Navajo architecture after the Spanish invaded