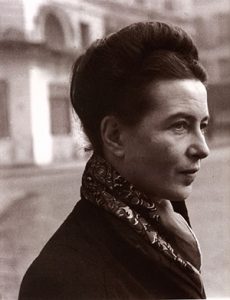 Simone de Beauvoir was a philosopher

Simone de Beauvoir‘s family lost most of their money after World War I. But by the early 1900s, even struggling families tried to send their daughters to school. De Beauvoir and her sister went to a good convent school. De Beauvoir thought of becoming a Christian nun. But when she was 14 years old, she realized she didn’t believe in God anymore.

What is a nun?
Women in European history
European philosophy
All our modern Europe articles

De Beauvoir went to college to study math and literature, then to graduate school for philosophy. She was 21 years old, and she was the youngest person ever to pass the admission exam. In graduate school, de Beauvoir met her boyfriend Sartre, but they never married, and, like most European philosophers, she didn’t have any children.

Like Sartre, De Beauvoir wanted to understand what good and bad meant if there was no God. In 1947, she wrote about the conflict between absolute freedom and real life: when do we have to do things we don’t want to do, or that we think are wrong? How can we be individuals and still have friends and families? Are women just as responsible, as individuals, as men – and if so, shouldn’t they have the same rights?

The Second Sex and feminism

In 1948, just as women were finally getting the right to vote in France, de Beauvoir published a second book, The Second Sex, about women. She argued that girls are not much different from boys when they’re born. They become different because people treat them differently. And then, she said, men use the excuse of these differences to shut women out of power and seize power for themselves.

Are women the same as men?

The rights of children and old people

De Beauvoir fought her whole life against French laws that limited the freedom of women. But she was also very much concerned with the question of time. She pointed out that the individual as a person with free choice and the ability to act in the world exists only in the middle of your life. As a child, you are still learning what you can do, and how to do things. As an old person, you slowly lose the ability to do things. But children and old people are still people. De Beauvoir died a few years after Sartre, when she was 78 years old.