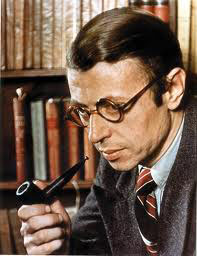 After World War I, many people in Europe felt that the old world had ended and a new world was beginning. Jean-Paul Sartre grew up at the beginning of that new world.

Sartre’s father died of a fever when Sartre was two years old, and his mother and grandparents raised him. He suffered from bullying at school. He studied philosophy at the Ecole Normale in Paris, where he met his girlfriend, Simone de Beauvoir – also a philosophy student. They never married, and, like most European philosophers, Sartre never had children.

Sartre served in the French army in World War II and spent months as a German prisoner of war. After he was freed, he taught high school. In 1943, Sartre published “Being and Nothingness”. Like Marx, Sartre didn’t believe in God. Without God, Sartre said, “We are left alone, without excuse.” – we are responsible for the choices we make. But if there is no God, he asks, what difference do our choices make? How can there be good or bad? Should we just act completely selfishly all the time?

Sartre’s answer was that selfishness itself forces us to be good, because in the end we all live better when we live in a better world. This idea has a lot in common with Marx‘s idea that people need to work in communities and cooperate with each other. So for a while Sartre hung out with Marxists. But Marxist leaders were always taking charge and telling people what to do. Sartre didn’t think that was really free cooperation, and he began to call himself an anarchist instead.

Sartre also worried that bourgeois people like himself – people with education and money – had too much power in the new democracies of Europe. Working class people like construction workers, nurses, and factory workers weren’t much aware of politics. They weren’t using their new voting power. Sartre tried to figure out ways to use the new television shows to reach these people and get them more involved, just as people try to use the Internet that way now. But he saw that television was more and more controlled by big corporations and the government.

A lot of people really hated Sartre for these ideas. When Sartre argued that France should leave Algeria and let it be its own country, someone tried to kill him with a bomb. But in the end, Sartre lived to be 75 years old. He died in 1980 from smoking too much.

Go on to de Beauvoir

Bibliography and further reading about Sartre: