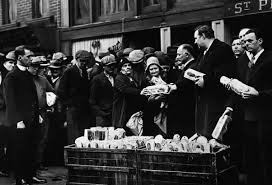 Germany during the Depression

Why was Europe suddenly poor?

After World War I, Europe was much poorer than it had been before the war. Many men had been killed in the war, and many houses and factories had been ruined.

What was World War I?
Europe and Colonization

Then in 1929, there was an economic crisis too. A lot of companies went out of business, and then the people who worked for those companies were out of work.

Once people were out of work they spent less money in stores and restaurants, and many other companies went out of business because there weren’t enough customers.

Germany and the Depression

In Germany, the depression meant that it was impossible for the government to pay off the money they had promised to pay to France after World War I. People got angrier and angrier about that money. After all, they said, this was money France had taken from them when Napoleon invaded, more than a hundred years earlier. Then France had paid it back, after 1870.

Who was Napoleon?
France’s Commune and Third Republic
Germany under Bismarck

Why should Germany pay it back again? German people were more and more willing to support any way to get back at France – even another war.

Bibliography and further reading about the depression in Europe: