Noureddin and the Persian Woman

A pile of gold coins

Here’s another of the stories Sheherazade told the king: Once the sultan had two viziers, a good one (Khacan) and a bad one (Saouy). Naturally Saouy hated Khacan. One day the two viziers were talking with the sultan in the garden, and they began talking about slave girls. Saouy said that the only thing that mattered in a slave girl was if she was pretty, but the good vizier, Khacan, said that a girl should also be smart, well-behaved, and if possible well educated – in short, she should be a whole person, and not just valued for her body.

The sultan agreed that women were more than just pretty faces, and he challenged Khacan to bring him such a girl. But the bad vizier, Saouy, said he thought that girl would be pretty tough to find, and expensive, if he did find her. “She might even cost 10,000 gold coins!” he warned. The sultan laughed and said he could afford it, and gave Khacan the money to spend when he found the right girl. 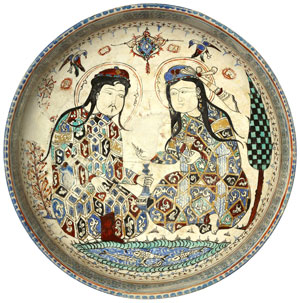 After some looking, Khacan found just the right girl – a Persian girl – and sure enough, she was expensive. He bought her for the 10,000 gold coins, and kept her in his house until it was time to bring her to the sultan. But Khacan’s son, Noureddin, saw the girl and fell in love with her. He convinced her that she was really meant for him, and not for the king, and she fell in love with him, too, and they secretly got married.

When Khacan found out, what a catastrophe! They’ve spent all the gold coins, and there’s no girl to give the sultan. They had to sell all Khacan’s wife’s jewelry to pay their debt. But then Khacan died, and Noureddin stupidly spent all of his money, and became very poor. Finally his wife sadly told him he would have to sell her, to get enough money to live, and Noureddin sadly took her to a slave-dealer.

But when the slave-dealer tried to sell her, along came the bad vizier, Saouy, and wanted to buy her for 4000 gold coins, and give her to the sultan! Nouredding couldn’t stand that, and he grabbed his wife back and beat Saouy up.

Of course Saouy went right to the sultan and complained. “Khacan’s son Noureddin beat me up, and just because I finally found you the girl you wanted and tried to buy her for you!” The sultan was very angry, so Noureddin and his wife ran away to the protection of the Caliph in Baghdad, who was more powerful than the sultan. The Caliph sorted it all out, killed the bad vizier Saouy, and made Noureddin his own vizier, and the Persian girl lived out her life happily as the vizier Noureddin’s wife, and always gave him good advice.