Aladdin and the Lamp – Arabian Nights 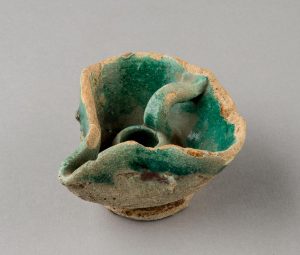 An Islamic oil lamp like Aladdin’s lamp, from the University of Michigan

This is one of the stories Scheherazade told the king.

Even though he was only a boy, Aladdin got his food by begging on the streets. His father had died, and his mother was very poor. One day a man came to him and said, “Hi Aladdin! I’m your long-lost uncle, and I’ve come to make you rich!” Aladdin was naturally suspicious. But the man convinced Aladdin’s mother, and she gave her permission.

Aladdin inside the cave

The mysterious man took Aladdin to a cave full of jewels and gold. He gave Aladdin a magic ring. He told Aladdin to bring out an old lamp he would find there and give it to him. Aladdin got the lamp, but he refused to give it to the man until the man helped him get out of the cave. Angry, the man trapped Aladdin in the dark cave and left him there.

The genie in the lamp 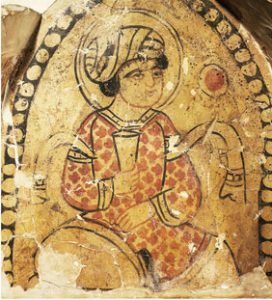 Aladdin was all alone, scared, and hungry in the cave. But he happened to rub the ring with his hand. Suddenly a magic genie came out of the ring and said he would do whatever Aladdin wanted. So Aladdin wished himself home again.

Aladdin gets rich and powerful

The ring genie told Aladdin that there was another, stronger genie in the lamp. So Aladdin rubbed the lamp, too. And between the two of them, the genies made Aladdin rich and powerful. He married the Sultan’s daughter. The evil man eventually came back to try to defeat Aladdin and get the Sultan’s daughter for himself. But Aladdin (with the help of the genies and his wife, the Princess) defeated him, ended up becoming Sultan, and lived happily ever after.