The Islamic story of wheat on the chessboard 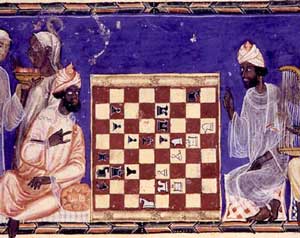 What is exponential growth?

About 1260 AD, Ibn Khallikan, a Kurdish historian living in the Abbasid Empire (modern Iraq), wrote an encyclopedia with biographies of many famous men (though no women). One of the biographies includes a story about chess and the meaning of “exponential growth.”

What are exponents?
More Islamic stories
All our medieval Islam articles

Why is the story set in India?

The story takes place in India, because Ibn Khallikan knew that chess was a game that came from India, and maybe because a lot of math ideas came from India too.

Where did chess come from?
Indian math and science

According to this story, King Shihram was a tyrant who oppressed his subjects. One of his subjects, a wise man named Sissa ibn Dahir, invented the game of chess for the king to play, to show him that a king needed all his subjects and should take good care of them.

King Shihram was so pleased that he ordered that the game of chess should be preserved in the temples, and said that it was the best thing he knew of to train generals in the art of war, a glory to religion and the world, and the foundation of all justice. 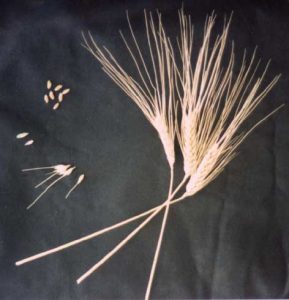 Close up of wheat seeds

The king wants to reward Sissa

Then King Shihram asked Sissa ben Dahir what reward he wanted for this great invention. Sissa answered that he didn’t want any reward, but the king insisted.

Where does wheat come from?

“What a dummy!” thought the king. “That’s a tiny reward; I would have given him much more.” He ordered his enslaved servants to bring out the chessboard and they started putting on the wheat.

Everything went well for a while, but the king was surprised to see that by the time they got halfway through the chessboard the 32nd square required more than four billion grains of wheat, or about 100,000 kilos of wheat. Now Sissa didn’t seem so stupid anymore. Even so, King Shihram was willing to pay up.

But as the enslaved servants began on the second half of the chessboard, King Shihram gradually realized that he couldn’t pay that much wheat – in fact, to finish the chessboard you would need as much wheat as six times the weight of all the living things on Earth.

Learn by doing: try this for yourself with grains of rice
More Islamic stories

To read more stories from the Islamic Empire: