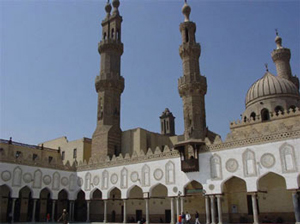 As soon as the Fatimid dynasty took over ruling Egypt, in 908 AD, the new rulers of Egypt needed to show how important and strong they were.

Who were the Fatimids?
Medieval African Architecture
All our Islamic Empire articles
All our Early Africa articles

One way of showing that was to build impressive new buildings. So they did build a lot of new buildings. One example is the Al-Azhar Mosque in their new capital, Cairo.

What is a mosque?
More about Islam

The Fatimid rulers named it Al-Azhar Mosque after Fatima Al-Azhar, the daughter of the Prophet Mohammed, the woman the Fatimid dynasty is named after. 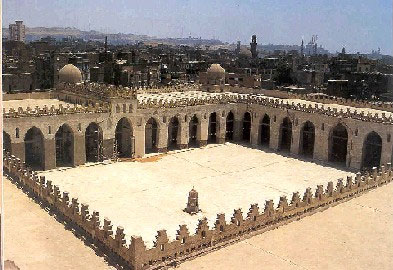 Al-Azhar mosque, like the mosques at Kairouan and Samarra, had a large open courtyard surrounded by rows of columns and a covered prayer hall with five more rows of columns in it.

After that, the Caliphs al-Aziz and his son al-Hakim built a mosque (990-1013 AD). This mosque follows generally the same pattern as the earlier mosque, with a big courtyard and a prayer hall with pointed arches. Three small domes emphasize which side the prayer hall is on.

On the opposite side, there’s a big entrance gate. It may be entrance gates like this that gave European architects the idea for Romanesque doorways like that of the Abbaye aux Dames in Caen (1050 AD). Like the Romanesque and later Gothic doorways, the door of Al-Hakim Mosque is in three parts, although here only the middle part actually has a door in it.

The Fatimid wall around Cairo 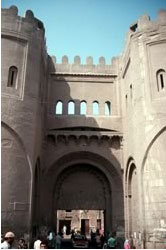 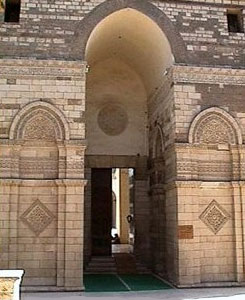 The Fatimids also built a great wall around Cairo, with several impressive stone gates in it. These towers and gates, built in 1087 AD, are very similar to the castles that William the Conqueror built in Caen (his home in Normandy) about 1050 AD and in London after he had conquered England in 1066 AD.

William the Conqueror
His castle at Caen

To the west of the Fatimids, other Islamic rulers like the Almohads were also building mosques at the same time; further south, in Ethiopia, rulers built Christian churches instead. Across the Indian ocean, this is the time of the rock-cut temples at Ellora, and the first free-standing stone temples in southern India.

Learn by doing: build a mosque like this in Minecraft, or with Legos
More about the Fatimids in Egypt