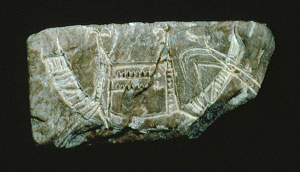 Indian sailing: an Indus River boat from the Bronze Age (ca. 2500 BC)

The first boats in India

The first people to come to India from Africa, about 50,000 BC, may have come in boats, following schools of fish along the coasts around the Arabian Peninsula.

Certainly people in India were using not only boats but sails in the Stone Age, by 3000 BC. These early boats may have been made out of bundles of reeds, like some Sumerian boats. 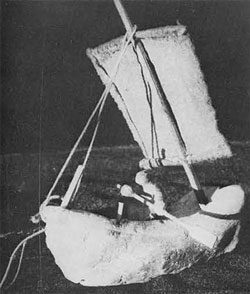 By the time of the Harappans, in the Bronze Age, Indian ships were sailing up the Persian Gulf to trade with the Sumerians there.

Who were the Harappans?
What’s the monsoon?

The monsoon winds carry boats towards the Persian Gulf in the fall, and back again in the late spring. These Bronze Age boats were probably made of teak wood, and they may have had sails. Boats sailed from baked brick docks with artificial basins built at Lothal and other port towns. 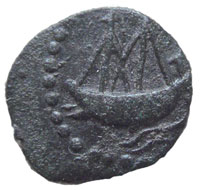 Indian ship-builders kept on using square sails all through antiquity and the Middle Ages, even after Mediterranean sailors began to use triangular lateen sails. Indian sailors did, however, begin to use ships with two masts.

They began to use the monsoon winds to sail not only to the Persian Gulf but also to Egypt and East Africa, and east to Southeast Asia. With the strong, steady monsoon winds, they didn’t need the lateen sail. But when Vasco da Gama arrived in the late 1400s with his fancy new sails on his ships, Indian ships could not fight him off.

Learn by doing: go out on a sailboat
More about West Asian Sailing