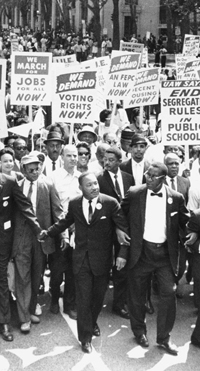 One of Martin Luther King’s most famous pieces of writing was his Letter from a Birmingham Jail. In 1963, Dr. King was in jail in Birmingham, Alabama for participating in a protest march. From the jail, he sent a letter to other Christian ministers – white ministers. In easier words, this is what the letter said:

You say that you support rights for black people, but you think the marches I am organizing are stupid and that this is not the right time for them. Also, you say I am an outsider, not even from Birmingham, so I should mind my own business.

But my job is to help black people get their rights, and so when black people in Birmingham invited me to come here, I came; that is my job. Also, like St. Paul, I have to fight injustice everywhere, and there is injustice in Birmingham, so I came here. Also, we are all Americans, and we are not outsiders in any American town.

You say we should wait; now is not the right time for protests. But white people will never give up power to black people unless we push them. Waiting won’t help. We have waited hundreds of years already, and we’re tired of telling our children they can’t go to the amusement park or the hotel because they are black. 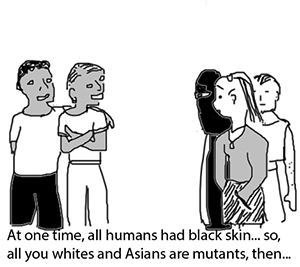 You say that you support rights for black people, but our protests cause violence. We are not violent; we are peaceful. It is the reaction of the police that is violent, but we do not blame the home-owner for the actions of the burglar. The violence is not our fault. You say we are extremists, but Jesus was an extremist for love, and Thomas Jefferson was an extremist for equality, and I am proud to be like them. I am proud to stand with the black people who have worked so hard, and dared so much, to win their rights. You should stand with us too.

More about the Civil Rights Movement