What are fluted columns? 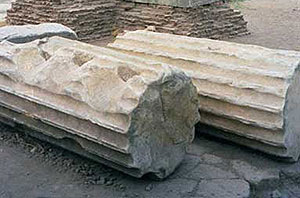 Fluted columns from the Forum in Rome

What does it mean to be fluted?

Most Greek and Roman columns (but not all) were fluted. That means they had narrow channels or grooves running up and down them.

What is the Doric order?
The Ionic order?
Corinthian order?
Greek archaic temples
All our ancient Greece articles

Why did Greek and Romans flute columns?

The Greeks probably started this idea because their earliest columns were made out of wooden tree trunks. When the builders shaved the bark off the trunks it left these vertical gouges. When the Greeks began to build stone temples, they copied the gouges from the wood because it made the columns look skinnier and taller and more elegant.

A feeling of rhythm

Fluting the columns, one flute after another, also gave the columns and the whole building more of a feeling of rhythm. Architects working in ancient Greece thought that rhythm was an important aspect of a temple. Fluted columns gave Greek temples more of a look of being purposeful, intentional – like you had thought about all the elements and weren’t just using the columns to hold up the roof.

How many flutes did each column have?

The Pantheon in Paris, built as a church in the 1700s AD with fluted columns.

When did fluted columns go out of use?

Roman architects also used fluted columns, but by Late Antiquity they seemed old-fashioned and most buildings just had plain columns.

In the Renaissance, when Europeans wanted to seem more like the ancient Greeks and Romans, they started to flute columns again.

They felt this helped to justify them in colonizing the rest of the world: they were just doing what the Romans did.

Today we use this kind of column on buildings like banks and courthouses, when we want the building to seem extra important and trustworthy.

Learn by doing: build a Greek temple out of Lego, or on Minecraft
More about rhythm and Greek temples