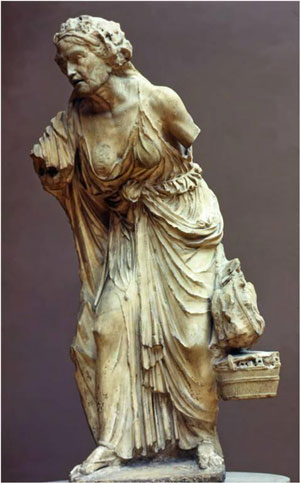 Hellenistic economy: a sculpture of a woman selling vegetables at the market

After the Peloponnesian War was over in 404 BC, everyone in Greece was poorer than before, and many men who had been soldiers were out of work. So a lot of those men went to be mercenary soldiers for Persia. A Greek general named Xenophon wrote about what it was like fighting for Persia.

Other things had changed too: the silver mines at Laurion were running out of silver, and the Romans were conquering Greek colonies in south Italy and Sicily. The Greeks and Carthaginians didn’t control the Western Mediterranean anymore, though they still sold plenty of stuff to the Romans.

On the other hand, the Hellenistic period saw the rise of the Silk Road through Central Asia. There were good, safe roads and a lot more caravan trade east and west across Asia than there had been before. The Greeks sold more wine and perfumes, jewelry, and wool cloth towards the east. Greek artists worked at Persepolis (in modern Iran). 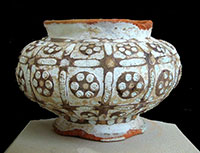 When Alexander‘s father conquered Greece, and then Alexander conquered all of West Asia in the 330s and 320s BC, the Greek economy picked up again. Greek traders were able to travel all over West Asia, all the way to India, selling their wine and olive oil, and buying cinnamon, pepper, medicines, silk, pearls, cotton, and knotted rugs. In Egypt, the Ptolemies also encouraged sea trade between Egypt and India using the recently discovered monsoon winds and currents. The Hellenistic period was a good time for the Greeks – until the Romans conquered them in the 100s BC.

How many Hellenistic Greek trade items can you find in your house?
More about Roman Greece

Bibliography and further reading about the Hellenistic economy:

The Class Struggle in the Ancient Greek World: From the Archaic Age to the Arab Conquests, by G.E.M. De Ste Croix (1989). A Marxist interpretation.