Arion and the dolphins – Greek mythology 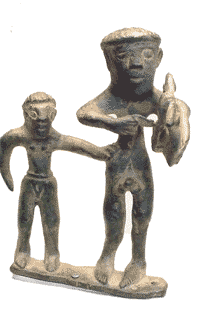 Arion and the dolphins: a lyre player and his helper (probably enslaved)  (Greece, about 680 BC, now in the Getty Museum)

Arion was a great singer

Herodotus tells us that in the time of Periander the tyrant of Corinth (which would be about 625 BC), there was a great singer whose name was Arion. Arion sailed from Corinth to Sicily to sing in a singing contest there.

Who was Herodotus?
More about Corinth
More Greek myths
All our Ancient Greece articles

Because Arion was such a great singer, he won all the singing contests and got tons of prizes. He had heaps of gold and jewels. When the contest was over, Arion got on a ship with all his prizes to go home to Corinth. 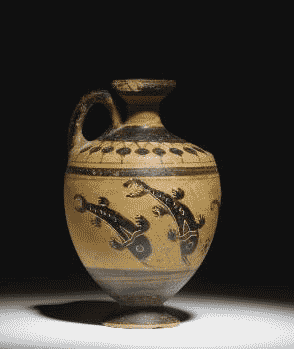 Dolphins on an Etruscan vase from about 520 BC

The sailors throw him overboard

But once they were out of sight of shore, the sailors on the ship decided to steal Arion’s gold and jewels.

Arion begged the sailors to just take his prizes and let him live, but they thought it was too dangerous to let him live. He might tell on them when he got home.

Arion and the dolphins

But a family of dolphins had been listening to Arion’s beautiful song. Just as Arion was drowning, the dolphins swam over and picked him up. Arion rode all the way back to Corinth on the back of a dolphin. When he got there, he told the tyrant Periander what had happened. Periander waited for the sailors to get to Corinth; then he arrested them and got all the gold and jewels back.

Herodotus tells this story as if it were true, and possibly there may have been a real musician Arion. And dolphins do sometimes help people. But this story is impossible so it’s not really true.

Greek Myths for Young Children, by Heather Amery (Usborne, 2000). My niece really likes this one. For younger children.

Greek Myths for Young Children, by Marcia Williams (1995). In comic-book format. My son loved it.

D’aulaire’s Book of Greek Myths, by Edgar and Ingri D’Aulaire. For older kids.

Mythology by Lady Hestia Evans, Dugald A. Steer (Editor)(2007) – My daughter loved this one! A new book in the Fairyopolis, Dragonology, etc. series.

Pandora’s Box: A Three-Dimensional Celebration of the Mythology of Ancient Greece, by Sara Maitland and Christos Kondeatis (1995). Not really about Pandora specifically, but a complex of stories, games, and puzzles about Greek mythology. All ages.

Greek Religion, by Walter Burkert (reprinted 1987). By a leading expert. He has sections on each of the Greek gods, and discusses the deeper meanings of the Greek myths, and their function in Greek society.

Teaching and Dramatizing Greek Myths, by Josephine Davidson (1990). Advice for middle school teachers on teaching Greek myths by having the students write and perform skits.