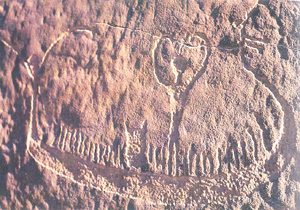 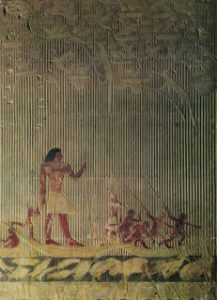 Egyptian wall painting from the Tomb of Ti, who is watching a hippopotamus hunt – 5th Dynasty Old Kingdom (ca. 2400 BC)

Around 3000 BC, Egyptian artists began to create their own rock walls to carve and paint, by building stone buildings. Most of the buildings we have left are mastabas, which were the burial places of rich people when they died. The pictures carved and painted on the walls of these mastabas were supposed to help the dead person out when he or she reached the next world, where the Egyptians thought you lived after you died in this world. So the paintings showed all sorts of things that people did in their regular lives.

Egyptian painters made their paints by grinding up minerals (rocks) of the right color like red ochre, chalk, yellow ochre, and copper carbonate, and mixing them together to get the right shade. They used charcoal to get black. Then they mixed that powder with water and something sticky – either acacia gum (the sap of the acacia tree) or egg white, so it would stick to the wall. We call this kind of paint “tempera”. 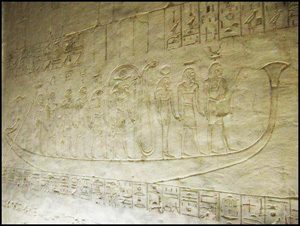 In the Old Kingdom, the pictures were almost always about daily life, but by the New Kingdom there were more temples being built, and on temples there were pictures about events that happened, reminding people about a big battle, for instance. Also in the New Kingdom, the Amarna period is one of great experimentation in Egyptian art as well as in religion and government.