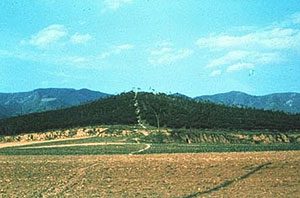 Tomb of Qin, the first emperor of China

Not everyone liked Qin though. In order to stay in power, Qin was often cruel to his subjects. He always suspected everyone of wanting to revolt. Qin was especially afraid of the scholars who knew philosophy and wrote books. He thought they wanted to break up his empire. So Qin had many scholars killed or exiled (sent out of China). And Qin also burned all the books he could find.

When Qin got old, he was also afraid of dying. He was afraid someone would try to kill him, so he lived the last part of his life hiding all the time. And he was always looking for the secret of how to live forever. He even travelled far away, to Shandong Province, looking for a medicine to make him live forever – and that’s where he died, in 210 BC. 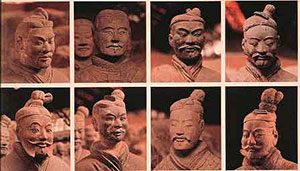 The next emperor of China built Qin a huge tomb, and buried Qin there along with thousands of life-size clay soldiers to accompany him to the next world. This kind of tomb is more typical of Central Asia than of China, so possibly the Qin emperors (like the later Yuan and Manchu emperors) were invaders from the north, from Central Asia. Possibly they were Scythians.

But after Qin died, assassins killed his successor, and they put a new emperor on the throne who was not very strong. He was not able to hold China together. Almost immediately all the different parts of China began rebellions against the Emperor. In four years, these rebels beat Qin’s huge army and destroyed the capital at Xianyang. Then the two main rebel leaders, Hsiang Yu and Liu Pang, fought over who would be the next emperor.

Did you understand this page? Take the quiz and see!
Earlier Qin Dynasty
Go on to the Han Dynasty

Bibliography and further reading about the Qin dynasty: