Why do eyes have pupils? 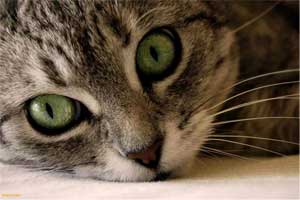 Cats have pupils that can get bigger or smaller.

By around 550 million years ago, some kinds of worms evolved eyespots sunk into their heads to protect them from being damaged.

As a side effect, it turned out that being sunk into the head also helped to focus the light on just one spot, so that more light reached that spot and the worm could see better. The sunken eyespots also let the worms tell what direction the light was going from. Seeing better gave these worms an advantage, so more of them survived.

But roundworms still could only tell light from darkness, not see a picture the way you do (if you can see). About 500 million years ago, some worms evolved pupils that were sunk so deep that they acted like a pinhole camera to let the worms see an image.

A pinhole camera project
What is a camera obscura?

The pupil of your eye is the black spot in the middle of the colored part. It looks black, but really it is a hole that lets light into the inside of your eye. It’s just like the sunken deep hole that roundworms had millions of years ago.

The Devonian period
Evolution of fish

Your pupils do that too: try standing in the bathroom in the dark until your eyes adjust and you can see a little. Then look in the mirror and turn on the light. Your pupils are big, but they will gradually get smaller and smaller. Look right at the light for a few seconds and then at the mirror again to make your pupils even smaller.

To see how the pupil works, build a pinhole camera

More about the evolution of eyes

Bibliography and further reading about the evolution of eyes: