Who were the Mongols?
Art of Central Asia
The Yuan Dynasty in China
Lots more China articles 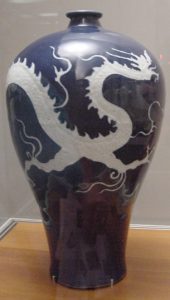 Landscapes with people in them

Actually traditional painting continued at a very high level throughout this time. Artists went right on drawing landscapes, although people became more important in the landscapes than they had been under the Song Dynasty. Artists also began to pay a lot of attention to different kinds of brushstrokes and the surface of paintings. 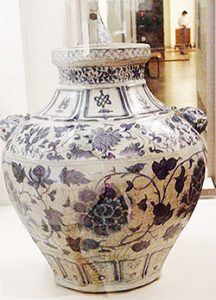 Still-life painting of objects like flowers also kept on being important, or even got more important.

At this time, a lot of rich men painted pictures, men who wanted to show how artistic and well-educated they were.

Porcelain to sell on the Silk Road

Pottery also kept right on changing and getting better during the Yuan dynasty. One of the main things that China could sell to the Silk Road traders was porcelain, which only Chinese potters knew how to make.

What is porcelain?
What was the Silk Road?

So Chinese potters worked hard to make new and interesting pottery every year, for the traders to sell.