Who were the Lydians? West Asian history 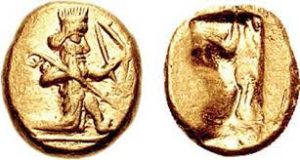 About 687 BC, according to the Greek historian Herodotus, King Gyges started the new country of Lydia (LID-ee-ah), in modern Turkey where the Hittites had ruled before the Dark Age.

Who were the Hittites?
When was Herodotus writing?
All our West Asia articles

Now that the Assyrian Empire had collapsed, and the Neo-Babylonians were not very strong, it was pretty easy for new countries to get started along the edges of the old empire. Gyges made his capital at the city of Sardis.

Background on the Assyrians
Where were the Neo-Babylonians? 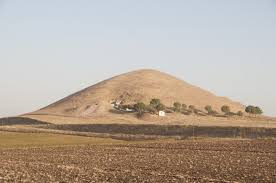 Earth mound covering the tomb of Alyattes, a Lydian king

From the time of Gyges (GUY-jeez) onward, the Lydians were pretty friendly with the Greek cities along the coast of Asia Minor (modern Turkey). The Greek word “tyrant” may be derived from the Lydian word for “king”, and coinage may also have gotten started here.

What does it mean to be a tyrant?

Probably Greek soldiers fought as mercenaries for the Lydian kings. In order to pay their soldiers, the Lydian kings may have made small lumps of gold. And then to certify that the lumps were the right size, the king stamped them with his image.

More about the history of money 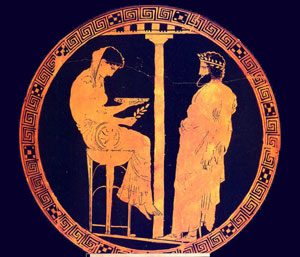 Pythia at Delphi, with Aegeus

In 560 B.C., Croesus became the king of Lydia. Croesus (KREE-suss) was so rich that he has left us the expression “as rich as Croesus.” Herodotus talks a lot about King Croesus, who he says was a friend of the Athenian Solon.

Who was this Solon guy?

Then in about 550 BC, Cyrus the Great attacked Lydia with the Persian army. Croesus apparently sent a messenger to the Greek oracle at Delphi asking what he should do.

All about the oracle at Delphi 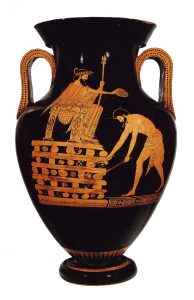 Croesus on the pyre (Athenian vase from the 400s BC)

According to Herodotus, Cyrus took Croesus prisoner. He put Croesus on a big pile of wood – a pyre – and said he was going to set it on fire and burn Croesus up. But when he heard Croesus talking, he realized that Croesus was a really smart guy, like him, and he took Croesus off the pyre and made him his advisor.

Lydia in the Persian Empire

In the end, Croesus and Cyrus seem to have made some sort of truce. But after the death of King Croesus in 546 BC, the Persians really took over Lydia, and soon they began to control the Greek cities nearby too. In 499 BC the Greeks attempted to revolt, and succeeded in burning the city of Sardis, but by 491 the Greeks lost and came under Persian control.

Bibliography and further reading about the Lydians:

Early Turkey: An Introduction to the Archaeology of Anatolia from Prehistory Through the Lydian Period, by Martha Sharp Joukowsky and Jean Blackburn (1996). Joukowsky is a well-known expert in West Asian archaeology.

Sardis from Prehistoric to Roman Times: Results of the Archaeological Exploration of Sardis, 1958-1975, by George Hanfmann (1983). Hanfmann is also a well-known expert on West Asia.

The Persian Wars, by Herodotus. Straight from the Greek historian himself.

Herodotus: And the Explorers of the Classical Age, by Ann Gaines (1993).

Money
The Oracle at Delphi
Herodotus
The Hittites
The Persians
More about West Asia
Quatr.us home