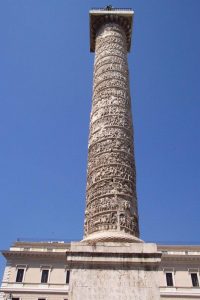 Column of Marcus Aurelius in Rome

Who built the column?

Who was Marcus Aurelius?
And his son Commodus?
Roman art
All our Ancient Rome articles

Why did Commodus build it?

Commodus wanted to remind people in Rome about his father’s victories in a war against the Marcomanni north of Rome (in modern Switzerland).

The Iron Age in northern Europe

What style is the column of Marcus Aurelius?

It’s a lot like Trajan’s Column, but art styles had changed eighty years later, and this column has much deeper relief and more violence than Trajan’s Column does. Also, Marcus Aurelius was not as successful in his war as Trajan had been, so there are more sad scenes on this column. 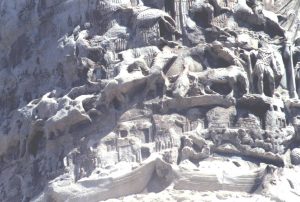 What does the column show? 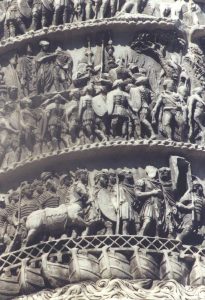 Just like on Trajan’s column seventy years earlier, the Romans wanted to emphasize their engineering and technical skill. They showed the boats they used to cross the river.

What is a pontoon bridge?
The Roman army

And they showed how Roman soldiers could create a pontoon bridge for soldiers and horses to cross the Danube river even more easily.

Some sad and terrible scenes

But other scenes from the column of Marcus Aurelius are sadder and grimmer than anything on Trajan’s Column.

There are scenes that show Roman soldiers cutting off the heads of their German prisoners. Frightened women try to protect little children.

Learn by doing: draw a series of panels that illustrate an event from your own life.

Bibliography and further reading about the Column of Marcus Aurelius: