Trajan’s column was built just after 100 AD to remind people in Rome about the Roman emperor Trajan‘s victories in a war in Dacia (DAY-see-ah) (modern Rumania). It stands in Trajan’s Forum in Rome, just below Trajan’s Markets, and near the old Roman Forum. 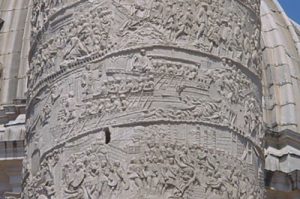 All around the column, there are pictures of the Roman soldiers fighting the war. In this picture you can see Roman soldiers crossing the Danube (DAN-youb) river in boats with oars.

The message of the column was that the Romans were civilized and good fighters, organized and skilled (and that Trajan was a great general), while the Dacians were shaggy, messy, and confused. 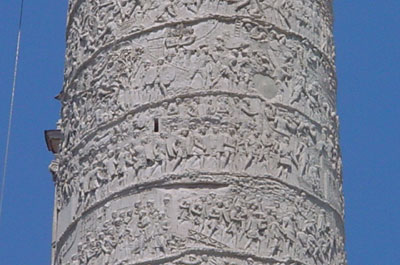 Column of Trajan: Can you see the little tiny window that gives light for the spiral staircase inside? Really this column is big, and that window is a normal size window.

In this picture, you can see a ladder near the top, and some men crossing a little bridge near the bottom. Again, the point is that Romans are good at building things, good with technology, while the Dacians are hopeless and the Romans are really doing them a big favor by conquering them. That’s not what the Dacians thought, though!

Here you can see a lot of Roman soldiers with their shields over their heads in the testudo formation (it means “turtle”). This scene, again, shows how organized the Roman army is. They can coordinate a complicated manoeuvre like this, with each man protecting the men on either side of him. But the Dacians (according to the Romans) just fight in a disorganized mess, and that’s why the Romans were able to defeat them. 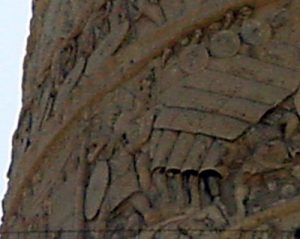 Trajan’s column: a bunch of Roman soldiers in the testudo formation

Trajan’s column and the Dacian wars, by Lino Rossi (1971). Rather out of date.