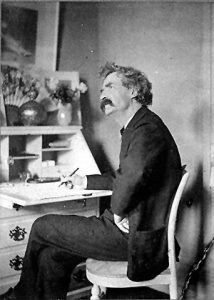 Who was Mark Twain?

He lived in the United States in the late 1800s AD, and he wrote books for both children and grown-ups. His real name was Samuel Clemens.

He was born in 1835, five years after the Cherokee Trail of Tears. He lived in Missouri, which had been taken from the Shawnee in his father’s childhood; Twain’s father moved to Missouri from further east. Twain grew up white in the South when black people were still enslaved there, and a lot of his books are about slavery and freedom. Twain grew up fairly well-off – his father was a lawyer and a judge – but his father died when young Sam was 11 years old, and after that his family was poor. Sam had to leave school and work for a printer. When the Civil War started, Sam was 25 years old. Rather than fight for slavery, or fight against his friends to end slavery, Sam left the South and lived in the West, in Nevada.

What did Twain write about?

In Tom Sawyer, Mark Twain began by showing that rich people, parents, schoolteachers, and ministers didn’t always know better than poor children. But the bad guy, “Injun Joe”, is surely one of the Native people who had recently lost control of Missouri. His next book, the Prince and the Pauper, suggested that poor and rich people were just the same, only in different clothes. In Huckleberry Finn, Mark Twain introduced one of literature’s first major black characters (after Uncle Tom’s Cabin). Twain also spoke out against European and American imperialism and colonization.

By looking at slavery and freedom, rich and poor, Mark Twain created an American way of writing and thinking that was different from British stories. In most British stories, like Dickens novels or Jane Austen novels, the heroes were born with “good blood” – meaning their parents and grandparents had been rich, even if they themselves were not. Mark Twain suggested that being good depended on your own behavior – not on how rich your parents were, or what color your skin was.

Learn by doing: Reading Tom Sawyer
Reading The Prince and the Pauper